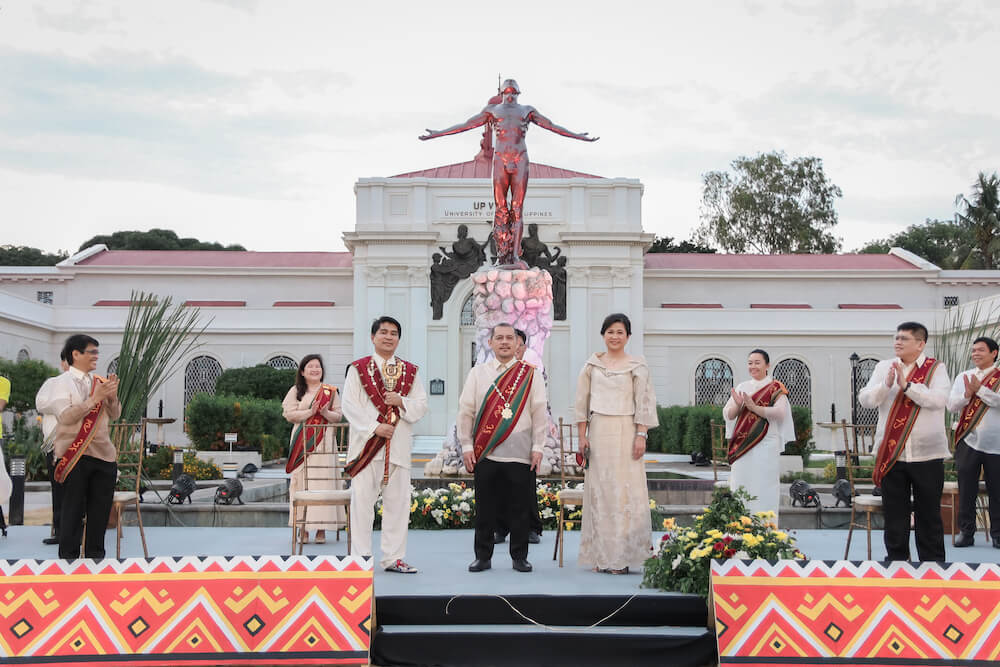 The Commencement and Investiture Ceremonies streamed live through UPV’s official YouTube and Facebook pages highlighted traditions of the past with the inclusion of chanters from Garangan, Calinog Iloilo, and a babaylan themed performance.

In his message, he gave particular attention to the plight of the Tumandoks of Central Panay, who have been relegated to the background and have always been left out, “For all intents and purposes, the Tumandok are locked out of the same path that brought all of us here. Interestingly, many of us could claim roots to this land. For all of our cultural hybridity, many of us could even claim to share in the same intangible heritage, albeit modified by centuries of living under the bell of Spanish Evangelization. The process that has allowed the Tumandok to retain their precolonial lifeways --- for which they are celebrated --- is, unfortunately, the very same process that has excluded them from mainstream society.”

The indigenous peoples have often been marginalized even in educational discussions and in the university knowledge agenda. “The crucial question for us is this: How would our teaching and our scholarship stack up against the reality of exclusion? How are we, as members of the academic community, extending the margins of human freedom? Are we, in fact, extending the margins of human freedom? Or are we not instruments of marginalization, oblivious to the consequences of what we do?”

Camposano again reminded the graduates of their role and their responsibility, “The real “Iskolar ng Bayan” should therefore exert utmost effort to know the poor and the marginalized. Empathetically, by putting themselves in the latter’s shoes, and reflexively by becoming aware of their own biases and making a sincere and determined effort to interrogate and transcend them. The “Iskolar ng Bayan” must abandon all claims to dictate what is good and just for the rest of society and engage those who are kept out of these walls in a genuine dialogue. Only then can they begin to understand what it means to be in the margins of society. Only then can the “Iskolar ng Bayan” descend from the ivory tower and begin the task of making the world less unequal. Only then will they be in a position to name the many facets of unfreedom and engage them critically and meaningfully.”

He also underscored that “The University cannot remain a mere site for the production and transmission of specialized knowledge and much less remain a mere supplier of professionals, lest we perpetuate our complicity with the institutional powers and the existing systems of inequality…

The University must aspire to become a site of deep intellectual disruption. A place of incessant critique where we learn to imagine what other things are possible, and how we might think and act differently about our own education and its consequences for society (Dussel 2010, p.34).” (read full speech here: Investiture Speech of the 11th Chancellor of U.P. Visayas)

A first for the University of the Philippines Visayas, which has campuses in Miagao, Iloilo, Iloilo City, and Tacloban City, the 2020 and 2021 Commencement Exercises was pre-produced and streamed live on UPV official UPV Facebook and YouTube accounts. It featured officials of the university both from the Iloilo and Tacloban campuses. President Danilo Concepcion, along with Deputy Speaker Loren Legarda, UP Diliman Chancellor Fidel Nemenzo, UP Manila Chancellor Carmencita Padilla, and UP Los Baños Chancellor Jose Camacho, among others, gave their well-wishes and messages for Chancellor Camposano.

Prof. Kevin Piamonte directed the impressive film production while the overall chair for the Commencement and Investiture was Vice Chancellor Philip Ian Padilla.