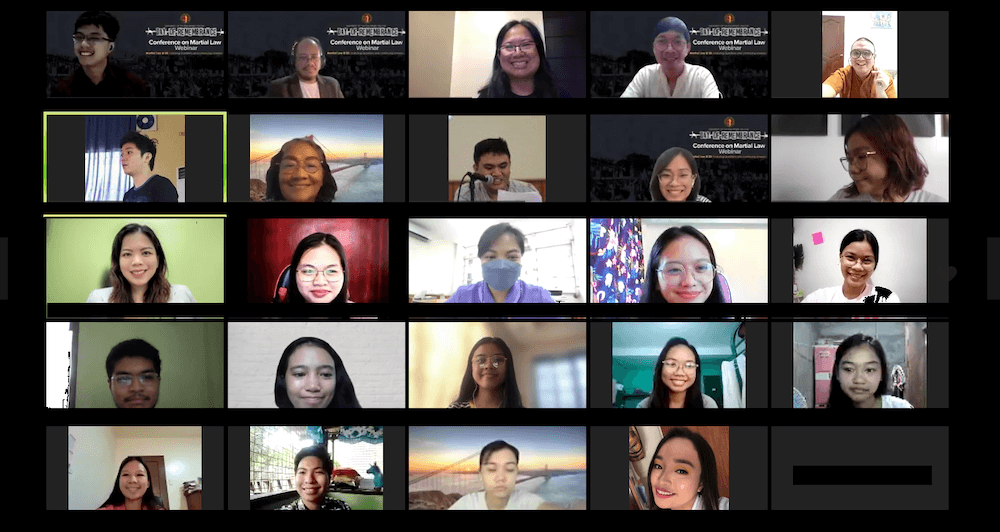 In commemoration of the 50th year of the Declaration of Martial law with the theme “Martial Law @ 50: Enduring questions and continuing answers,” UP Visayas organized an online conference on Martial Law on Sept. 22, 2022.

The topics during the conference were the following:

President Rodrigo Duterte’s declaration of martial law in Mindanao from May 2017 to December 2019, in conjunction with the Marawi war, casted a long shadow on the military’s role as state agent in this contested space. While legally more circumscribed under the 1987 Constitution, the historical referencing to the martial law during the Marcos dictatorship framed military-NGO interactions during humanitarian operations. For local authorities in affected communities in Lanao del Sur, martial law connotes a power hierarchy, with them submitting to military oversight and directives compared to normal times. While cognizant of the human rights parameters of martial rule, military commanders in Mindanao nevertheless consider it a plus in exacting more cooperation from erstwhile errant local chief executives within their area of operations.

Within this highly militarized and historically infused milieu, Dr. Hall presented military and civilian perspectives on martial law and identify points of convergence and divergence using data collected from interviews in 2018-2019 in line with the Australian National University (ANU)-funded projects on Military-NGO Engagements during the Marawi Siege, and Unpacking Peace and Order Councils in Mindanao.

2. Notes from Mayamor’s guerilla archives: cultural work and agrarian revolution in Panay Island during the anti-dictatorship struggle which tackled literatures on activism delivered by Prof. Karlo Mongaya of UP Diliman Departamento ng Filipino at Panitikan

The paper shared notes on the “guerrilla archives” of Roger Felix Salditos (1958-2018), a revolutionary martyr, painter, and writer who is better known by his nom de guerre Mayamor or Maya Daniel. “Written in extraordinary circumstances as a cadre in an underground revolutionary party, Mayamor’s prolific writings reveal the complex histories of radical cultural work and agrarian revolution in Panay Island during the anti-dictatorship struggle in the 1970s and 1980s.

Mayamor traces the emergence of the revolutionary movement in Panay from the linking up of young activists mobilized by the radical upsurge of the 1960s and the remnants of the old Huk peasant movement in Central Panay. The combination of youthful cadres and Huk veterans, as exemplified by the figure of Coronacion “Waling-Waling” Chiva, energized the armed struggle in Panay under authoritarian conditions. Mayamor chronicles the dynamic interaction between the revolutionary movement’s anti-imperialist politics and indigenous Tumandok struggle for land and self-determination, an identity crystallized amidst resistance to dictatorial rule. He also pens a summing-up of the experiences of revolutionary cultural work and literary production in the context of the agrarian revolution in Panay’s countryside, which experienced its “Golden Age” during the peak of the anti-dictatorship struggle.””

3. Testimonial narratives as counter-history: the early years of militarization in Sulu (1972-1974) by Mr.  Elgin Salomon, Division of Social Sciences, UP Visayas

Using oral history and eyewitness accounts, the paper explored the use of testimonial narratives of Muslim Tausug witnesses and survivors during the early years of militarization of Sulu province (1972-1974) in the southern Philippines as a counter-history to the dominant, monochromatic, and polarizing historiography of Martial Law in the Philippines. Collected through semi-structured interviews, the article focused on the silenced and subjugated narratives of war and violence and the role of identities and culture in articulating the conflict. These narratives served as an alternative source of knowledge on the marginalization of Muslim Mindanao during the repressive years of Ferdinand Marcos’ Martial Law. Locating Islamic Studies in Philippine and Bangsamoro contexts would deepen the understanding of how Islam was used by the Muslim Tausug to air their grievances and to fight against oppression. Rooted on their postcolonial experience and their material condition, the Muslim Tausug were able to use Islam as their framework for emancipation.

4. Surviving the City: housing and the urban poor during the Martial Law years (1972-1986) presented by Gabriel Gagno, Division of Social Sciences, UP Visayas.

The paper was “a preliminary inquiry into the history of housing in Metro Manila during the regime of Ferdinand Marcos, Sr (1965-1986). While housing has been scarce especially in the aftermath of World War II, it was exacerbated by the lack of clear and coherent policy on housing the urban poor. More importantly, they were viewed as nuisance and dangers and were thus frequently evicted and relocated to the city's peripheries. This was intensified during the regime of Marcos Sr., who decreed the illegality of informal settlements, intensified demolitions, and otherwise continued its assault on the urban poor through the policies of the Ministry of Human Settlements (MHS). Regardless of these state-sponsored assaults on the right to housing, the residents of informal communities fought back. This discussion aims to contribute to the discourse on housing by zooming in to the everyday life of the urban poor, where repression is produced and reproduced.

An open forum followed, which was moderated by Prof. Brian Ventura, also the focal person for the Martial Law Day of Remembrance for the Visayas.

The UPV Day of Remembrance activities are made possible through the efforts of the CAS Division of Social Sciences, Center for West Visayan Studies, Division of Professional Education, Information and Publications Office, Office for Initiatives in Culture and the Arts, CAS Student Council, University Student Council, UPV Kamaragtas, and Dakila. (With sources from the abstracts of the Paper Presentations)