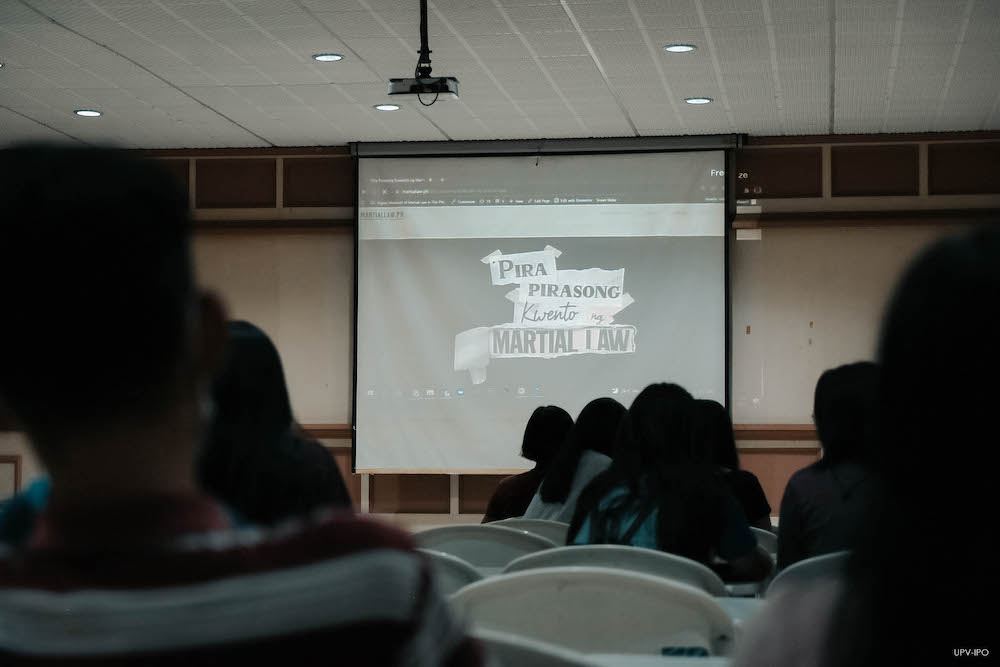 Students of the University of the Philippines Visayas (UPV) were able to watch Filipino films “Liway” and “11,103” on Sept. 23, as part of the series of activities conducted by UPV to commemorate the 50th anniversary of the Martial Law declaration.

After the film showing, some students gave their reactions and insights, while others shared the importance of such films and how they relate to the current political climate of the Philippines.

“Liway” is a true story of a young mother who uses story-telling to protect her child from the reality of growing up in prison and the difficult life she endured; while “11,103” is a documentary about survivors of the state-sponsored violence during the Martial Law.

The film showing is also part of the 10th edition of the Active Vista International Human Rights Festival of DAKILA, a non-government organization composed of artists, students, and individuals committed to advocating social consciousness formation among both their industry peers and their immediate audiences.

Danica Keithly Celiz of DAKILA – Iloilo said, “we want to try to reach out to as many people in the community and the schools.”

She added that people are bombarded with fake news on social media so “we want to break that narrative through the films.”

In his opening message, Mr. Rad Xavier Sumagaysay, a faculty of the UPV History Cluster, said in the age of disinformation, historical distortion, and brushing off history as “chismis” (gossip), such films are “crucial in preserving the memories, experiences, and narratives of those who suffered under the dictatorship.”

“Fifty years later it seems that not much has changed – current socio-political realities require a reflection and a reassessment of our history and what it means moving forward,” he said.

The film showing was made possible through the collective efforts of the College of Arts and Sciences (CAS) Division of Social Sciences, Center for West Visayan Studies, Division of Professional Education, Information and Publications Office, Office for Initiatives in Culture and the Arts, CAS Student Council, UPV University Student Council, UPV Kamaragtas, and DAKILA.

Meanwhile, the Martial Law Poster Exhibit was launched at the UPV Miagao campus as part of the program during the film showing. The launching was led by UPV Kamaragtas chairperson Jamina Kathleen Estrebor.