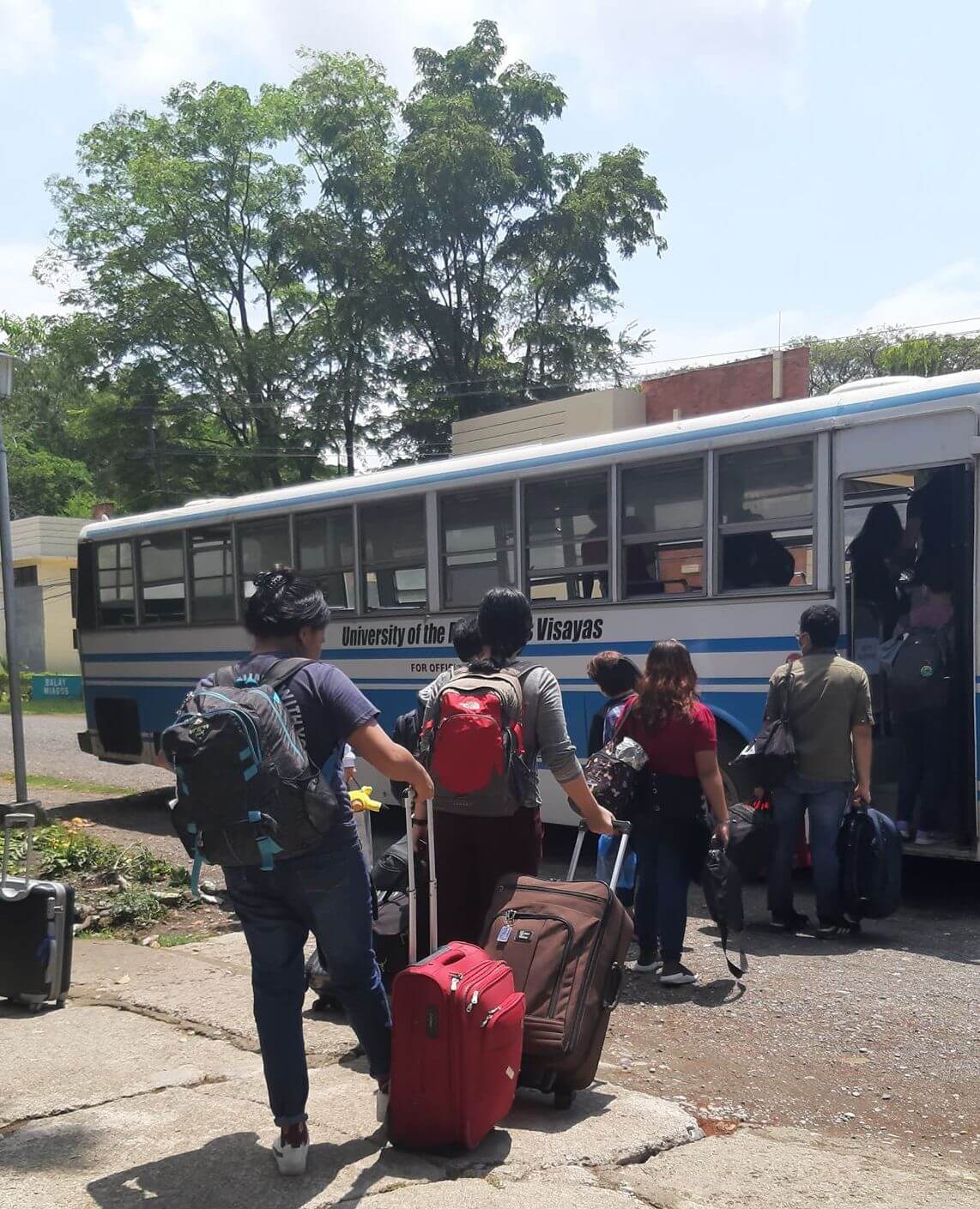 COVID-19 has disrupted the lives of people all over the world. UP Visayas experienced the same fate as the rest of the country is waging a battle of unparalleled proportion against a virus, never before experienced by the modern world. Despite this, UPV never wavered and met the challenges of the pandemic head-on. The UPV community stood up and fended for one another.

Six months have passed after the first lockdown was issued on March 17, 2020. Although announced nine days earlier, the entire nation was unprepared, caught unaware of its far-reaching ramifications.

As early as March 13, 2020, UPV opened only one gate for entrance and exit in its Miagao and Iloilo City campuses as a preventive measure and issued sanitation protocols. It created the UPV Disaster Command Center (UPVDCC) on March 16, 2020 (AO RPB 2020-134) in anticipation of the various challenges that will arise from the pandemic.

Although many of the out-of-town students of UP Visayas Miagao and Iloilo City campuses, were able to go home before the lockdown (air, sea, and land travel), there were about 159 students at the Miagao dormitories and about 190 living in boarding houses within the town of Miagao who were unable to go home. In the Iloilo City campus dorm, 17 students were stranded while 32 were accounted for that were living off-campus.

On March 21, 2020, UPV was able to initially send home some students who live in several municipalities in Iloilo, Antique, and Capiz. This was through the coordination of the UPV Logistics Team led by Vice-Chancellor for Administration Mary Ann Gumban with the following members: Engr. Rolando Jamero, Engr. Reginald Monsale, Dr. Ma. Cecilia Villaruz, Mary Lyncen Fernandez, Melany Calcaben, Divina Punongbayan, and Ronnie Fabillo. The UPV shuttle bus was used to transport students from the campus. These students were dropped off in areas nearest to their residence. They were provided with food and water and were escorted by the Chief of the UPV Security Service Force Raymund Germarino. Unfortunately, stricter border passage in Aklan prevented the few remaining on board to go home. They were brought back to the Miagao campus dorms and were later sent home successfully on May 24, 2020, via the UPV bus.

Thereafter begins the long process of caring for the remaining stranded students living in the dorms and boarding houses in the Miagao and Iloilo City campuses. Preparations for their repatriation continued.

The first case of COVID-19 positive in Miagao was identified on March 27, 2020, living just a few meters away from the UPV’s perimeter fence, the staff houses, and dormitories. The administration decided to seal the campus from public incursion for containment. Jeeps and tricycles that ply inside the campus were not allowed to enter. Non-UPV personnel were allowed to go to Land Bank only which was located inside the campus. Deliveries of food, water, and medicines were likewise allowed to enter.

Unable to go the various eateries within the town because of the suspension of ‘byahe,’ the stranded dormers were initially allowed to temporarily cook at the dorms’ premises. Makeshift kitchens were installed as the dorms are not equipped for cooking.

UPV received a flood of donations in response to the call of support by the UP, Magbubunga Tayo! and the UPV UPdanay Donation Drive.

The group who coordinated the donation is composed of: Prof. Monique Muyargas, Atty. Nellie Regalado, Prof. Benmar Panaguiton, Anna Razel Ramirez, Maureen Ongo, Ellaine Daguman, Lucia Flauta, Judith Jirao, and Rinj Tutisura. The donations came from various groups but were mostly from the alumni such as iAmUPHi and campus organizations.

The amount of cash donations generated by the UPV Foundation, Inc. through the UPV UPdanay and the UP, Magbubunga Tayo! as of July 2020, was P751,310.45. This was used for all COVID-related relief efforts and activities. Included in this is the full amount of P 250,000.00 donated by alumnus Mr. Edwin Valencia which was used to purchase one biomedical freezer and one microcentrifuge. According to Dr. Noel Ferriols, Director of the Genome Center Visayas, “the biomedical freezer is used for the storage of reagents such as those used for the RT-PCR testing kits. It can also be used to store extracted RNA samples. The microcentrifuge is used as part of the RNA extraction process in tandem with spin column-based RNA extraction kits at the Philippine Genome Center-Visayas.” These will be lent to WVSUMC when its lab will be ready for COVID-19 testing.

The university officials also responded to the call of Chancellor Ricardo P. Babaran to donate their representation and travel allowances for one month which was given as cash subsidy for the stranded students.

Dormers, as well as students living off-campus in both Miagao and Iloilo City, were the primary recipients of the food donations and care packs. Other donors also gave fresh fruits, face masks, and hygiene packs.

Through the UPV Logistics Team, transport services were provided for the students, along with staff house residents who had no vehicle, to do their marketing in town, get money from ‘padala’ outlets, buy medicine, or go to Land Bank.

The Team also requested Dr. Marshaley Bacquiano and Dr. Johnrev Guilaran, BA Psychology faculty members of the Division of Social Sciences, along with Annie Manzano of the Office of Student Affairs, to make themselves available to the students for counseling.

By April, the students were requested to discontinue the cooking in the dorms because the approaching summer is fire hazard season. Besides, there was also a water shortage in the campus because UPV’s wells were being drained by nearby onion farmers.

In exchange for stopping cooking in dormitories, stranded students were given food subsidies in cash, following a socialized scheme, with the many of them receiving P150.00 each per day. They were encouraged to buy food at the UPV Employees Cooperative cafeteria located inside the campus. The cash subsidy totaled to P 325,490.00 and continued until May 15, 2020. Dormitory fees were also waived from March 16 to May 20, 2020. There was a second waiving of fees from June 23 to July 31, 2020 for students that remained.

The university ensured the availability of a WiFi signal for the students so that they can continue to get in touch with their families and friends 24/7. This was to ease the burden of being stuck in their dormitories. Access to the Netflix channel for film viewing was also granted.

Before the anticipated lifting of the ECQ nationwide on May 15, the UPV Logistics Team has again started preparing for the repatriation of the students. This included the facilitation of medical certificates, LGU clearances, and other necessary documents to ensure a safe pass for these students to their respective communities.

The assistance of the alumni in various agencies was also tapped to ensure that there is an organized and efficient transport system available for the students. The alumni, headed by the iAmUPHi and the UPAA-Iloilo Chapter have always been strong supporters of UPV, even more so during these challenging times.

On May 22, Negros-bound students were sent home followed by those bound for the various provinces of Panay on May 24. These successful repatriation efforts paved the way for the sending home of the remaining ones. In June, more students were sent homebound for various destinations in NCR, Luzon, and Mindanao. Every time they were sent off, they were shuttled by the UPV shuttle bus, provided a security escort along with an OSA staff, and were provided food and water.

Ten students bound for Cebu and Zamboanga boarded BRP Dagupan from the Iloilo City Port on June 6, 2020. UPV alumnus and Chief of the Philippine Navy, VADM Giovanni Bacordo ensured that these students got a safe ride from Iloilo to their homes. LCDR Junie Rubio (Commanding Officer, BRP Dagupan), Prof. Babbeth Vargas, and UPV alumnus, Mr. Van Evangelista who is based in Zamboanga assisted in the coordination.

The Office of the Vice-Chancellor for Administration, the OSA Repatriation Team, and UPV Logistics Team ensured that the students were sent home safely with their families despite the difficulty and challenges.

There were other sectors of the UPV community that needed assistance amidst the pandemic but the UPV administration was mindful that the needs of the students are prioritized. (Mary Lyncen M. Fernandez, with notes from Anna Razel L. Ramirez) 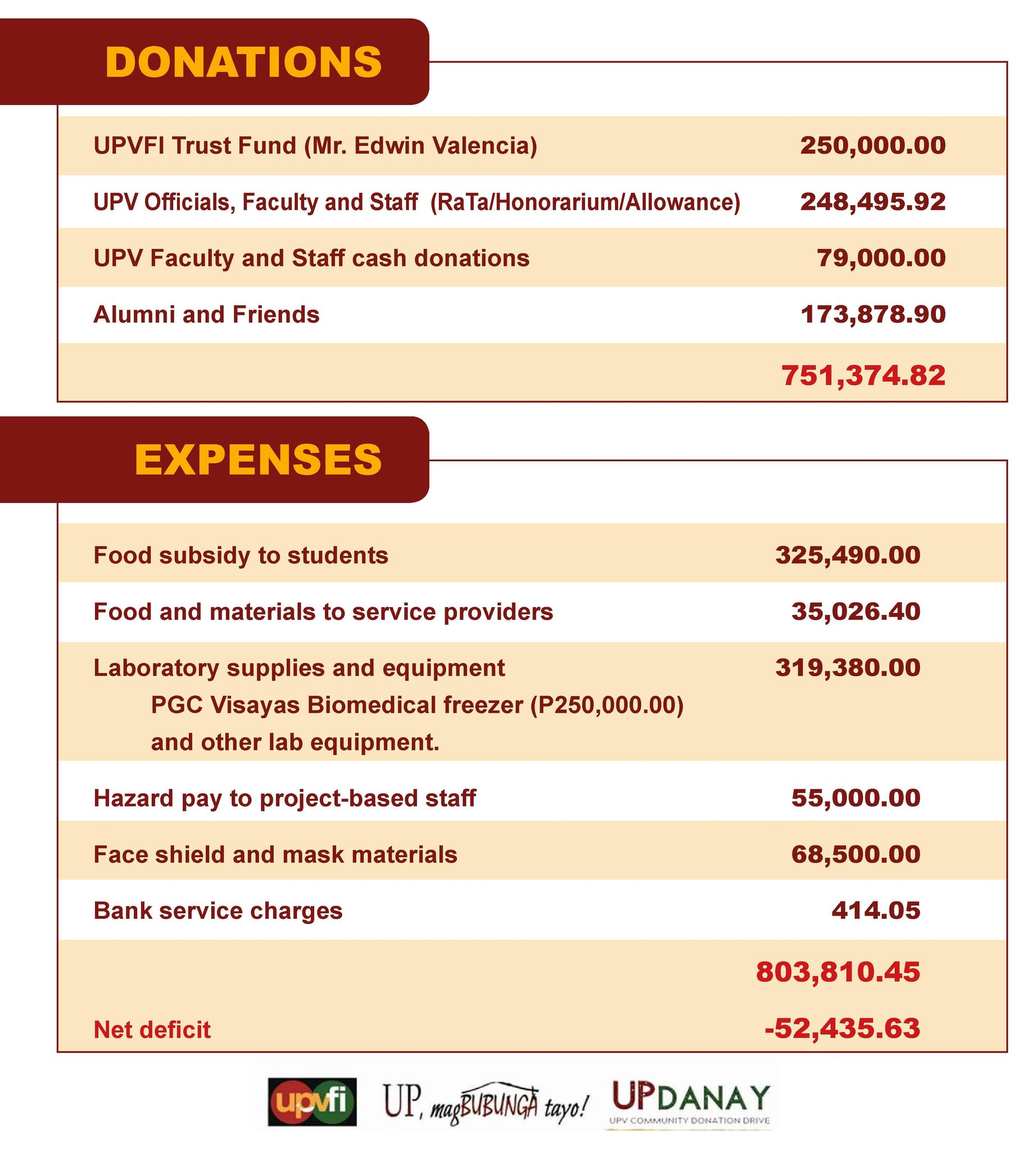