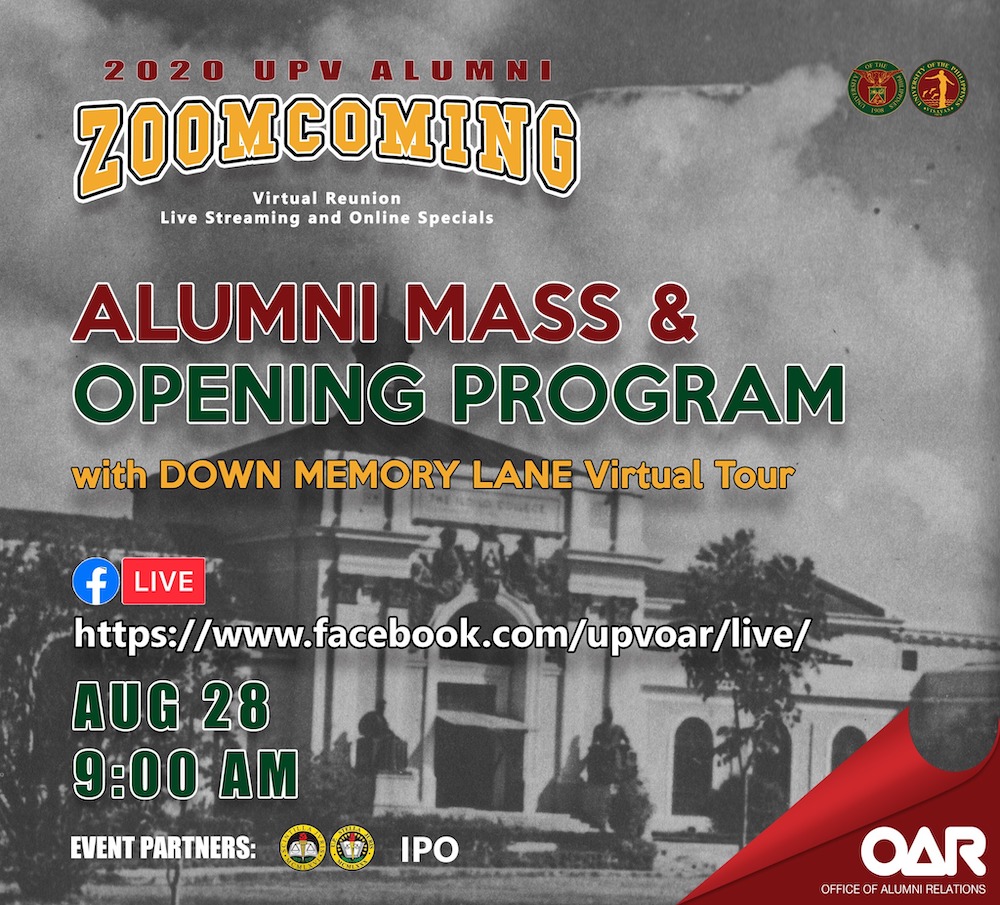 The day was formally opened by the “Alumni Mass,” followed by the “Opening Program.” These were streamed live from the UPV Little Theater. The alumni got to attend the thanksgiving mass and opening program right from their very homes.

The highlight event, “UPV Alumni Zoomcoming Virtual Reunion and Online Socials”, was held in the evening. Alumni from around the world got to see each other via virtual meetings. Other alumni watched via live streaming. The virtual reunion gave way for the alumni in attendance to have fun, albeit short, “kamustahan.” Even those viewing the live stream sent in greetings to their classmates and batchmates through chat comments.

UP Officials were also there to send their greetings. Among them were UPV Chancellor, Dr. Ricardo P. Babaran, Assistant Vice President for Public Affairs, and System Office of Alumni Relations (OAR) Director, Prof. Maria Angelica D. Abad, and UP President Hon. Danilo L. Concepcion. The officials expressed delight in being part of this “first-ever,” “landmark,” and “milestone” event.

Justice Francis H. Jardeleza, retired Associate Justice of the Supreme Court, gave the keynote speech. Jardeleza gave tribute to the alumni, from the early pioneers to today’s “movers and shakers,” – who are instrumental in the improvements in UPV – and the “regular” and anonymous donors who give support to scholars or respond to university fund drives.

He also announced on behalf of his class, UPV High School Class of 1965, their gift to UPV in the amount of P300,000 for the establishment of the Historical Preservation Initiative, which will help in the preservation of the Old High School Building and the Woman’s Club Building.

The event also saw the UPAA Iloilo Chapter’s recognition and appreciation of the COVID-19 Initiatives done by the various alumni and alumni groups around the Visayas region. These are individuals and organizations that have made a big impact on the response efforts done during the pandemic.

Among those in attendance were alumni jubilarians from the class of 1965, 1980, 1990, 2000, and other alumni including Senator Franklin Drilon. Officers of various UPAA Visayas chapters, UPV officials and personnel, also joined.

UPV OAR Director Prof. Benmar B. Panaguiton delivered his closing remarks at the end. Panaguiton said this year’s virtual homecoming was a response to the question of how to keep the university connected with the alumni despite the pandemic. While major alumni associations – UPAA (national) and UPAA Iloilo Chapter – canceled their homecoming activities, UPV OAR decided to continue with the homecoming by moving it online. “The initial idea was just to have a zoom meeting where everybody can meet. Eventually, it grew as ideas came in,” he added.

In closing, Panaguiton thanked everyone who participated in the activities and the various alumni and alumni groups who are at the forefront of community service during today’s quarantine.