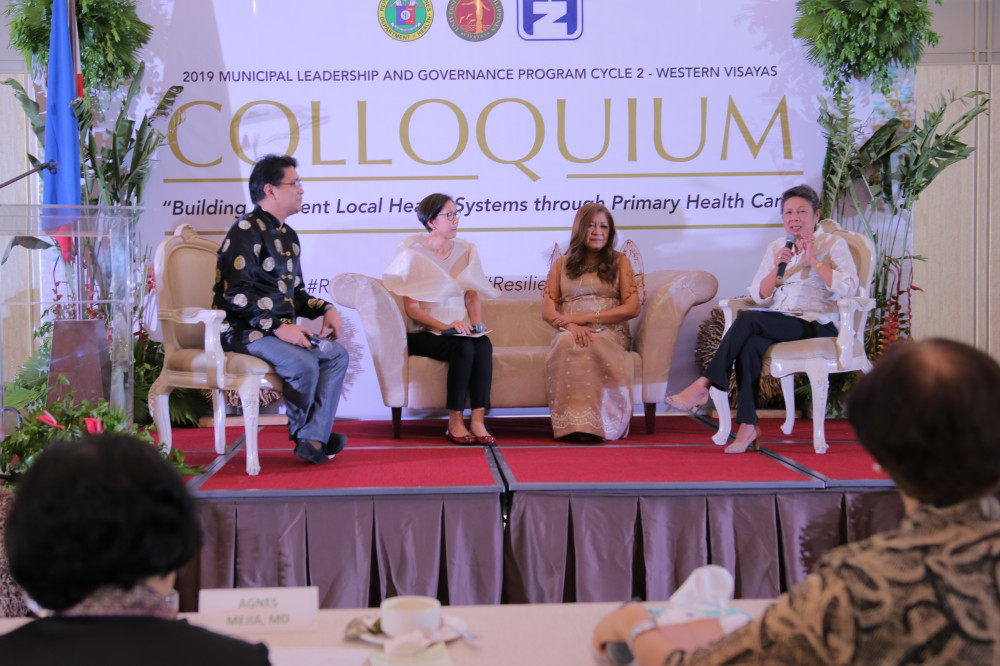 The University of the Philippines Visayas, along with the Department of Health-Center for Development (DOH-CHD) 6 (Western Visayas), and Zuellig Family Foundation, held a colloquium ceremony of the Municipal Leadership and Governance Program (MLGP) Cycle 2 in Iloilo City On June 5, 2019. With the second cycle’s “Building Resilient Local Health Systems through Primary Health” as its theme, the program showcased their Local Government Units (LGUs) partner’s health challenges and leadership interventions to promote more resilient and responsive local health systems at the municipal level.

The graduates for this program include Local Chief Executives (LCEs), Municipal Health Officers (MHOs) and their “Third leaders,” which are either the Municipal Planning and Development Coordinators (MPDCs) or Municipal Social Welfare and Development Officers (MSWDOs) of each LGU in Region 6 for the second cycle.

In this cycle, thirteen (13) municipalities in the region managed to complete their three-module course under the said health governance training. The last batch of Cycle 2 graduated last June, namely the municipalities of Ibajay and Lezo in the province of Aklan; Belison, San Jose de Buenavista, Valderrama, and Libertad in Antique; Sapian, Sigma and Tapaz in Capiz; Jordan in Guimaras; Oton and Badiangan in Iloilo; and Manapla, in Negros Occidental. The municipalities highlighted their health best practices and interventions through bridging leadership framework and other strategies such as their deep-dive journeys and practicums.

Earlier, the Batch 1 composed of of Balete, Buruanga, Numancia and Tangalan in Aklan; Bugasong and Sebaste in Antique; Jamindan in Capiz; Cabatuan and Lambunao in Iloilo; and Binalbagan in Negros Occidental ) of MLGP Cycle 2, graduated on April 23, 2019.

The said partnership with UPV, ZFF and DOH-CHD Western Visayas started on October 2014. At that time 28 LGUs in the region managed to complete the two-module MLGP Cycle 1 in 2016. This is in addition to twenty-three (23) aforementioned LGUs that graduated and completed the program for Cycle 2.

Dr. Philip Ian Padilla, professor at UP Visayas and Project Leader of MLGP, said that their role as academic partner was to provide technical assistance as well as coach the municipal leaders through the training modules as they lead the implementation of their health programs in their respective LGUs. These leaders, in turn, would cascade skills learned to the grassroots level.

For ZFF Executive Vice President- Mr. Austere Panadero, this partnership “is about building the capacity of Local Chief Executives under teams on leadership so that it could really effectively lead reforms in the local health systems.”

The collaboration showed significant results in these towns. Maternal and child health services in the regions also showed progress as many pregnant mothers now prefer to deliver their babies at the health facilities as well as more births are now being attended by skilled health workers. According to the DOH6 statistics, facility-based delivery in the region has increased from 87.28% in 2013 to 94.77% in 2017. Likewise, the deliveries by skilled-birth attendants had increased from 83.59% to 93.82% during the same period.

“This was made possible through the collaborative efforts of the local health team, municipal leaders, and other stakeholders. These changes have led to less inequities in our community as seen from the improved health indicators in Western Visayas in the past five years,” said Dr. Marlyn W. Convocar, Regional Director of DOH-CHD Western Visayas.

According to DOH 6-HLGP Coordinator Dr. Mary Joy Castroverde, the impact of the program was that they were able to change the perspective of the LCEs by making health an utmost priority. She added that MLGP was able to make the LCEs, MHOs and Third leaders as partners in looking at their local health systems, as well as addressing the gaps and inequities in order to improve their health outcomes.

The MLGP has already trained 51 Local government units across the region. These LGUs are expected to sustain their health gains and make it a resilient and responsive local health system. Moving forward, the program intended to have another cycle as it eyes to invite more municipalities in the region. (Source of Statistics: DOH-CHD WV)