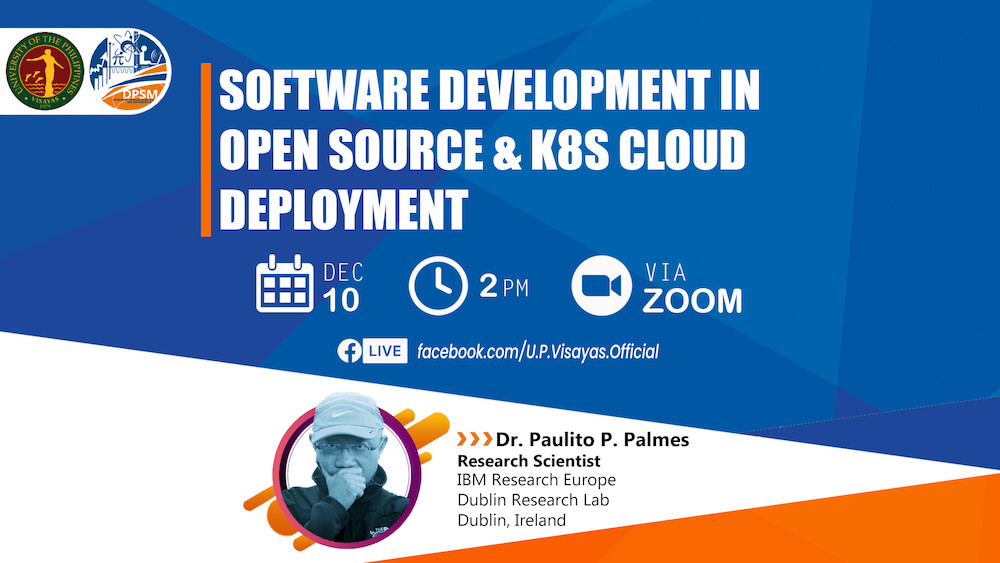 As we go deeper into the Digital age, Software Development has been one of the flourishing industries. With the industry's growth, developing software from scratch may be difficult as most global tech companies hold proprietary claims over most software development tools.

The public service committee of the Division of Physical Sciences and Mathematics (DPSM) of the College of Arts and Sciences (CAS) of the University of the Philippines Visayas (UPV) conducted its second webinar entitled “Software Development in Open Source and K8s Cloud Deployment” last December 10, 2021, Thursday, at 2:00 in the afternoon. The webinar aims to expose the audience, especially young developers to open-source software development – an accessible, collaborative, and free process to develop software without worrying about license agreements.

Dr. Paulito Palmes, a research scientist at the IBM Research Europe (Dublin Research Lab), served as the guest speaker for the webinar. Dr. Palmes started his talk with the introduction of GitHub – a version-control platform where developers can access and collaborate on open-source projects. Emphasis was given on the basic features and functionalities of the platform for collaborative software development. The second half of the talk featured Kubernetes, also known as K8s – an open-source system for deploying and managing projects and applications. It focused on the system’s automated deployment and the use of the Cloud for project deployment.

An Open Forum was held after the talk wherein Dr. Palmes was able to enthusiastically address a variety of questions posted in Zoom’s Q&A feature and Facebook Live. Questions were a wide array of topics such as the technicalities of GitHub and K8s, the future of Data Science, and Artificial Intelligence.

The webinar was closed by the Chair of the Public Service Committee, Dr. Jhoanne Marsh C. Gatpatan. She also took the opportunity to invite everyone for the public service committee’s last webinar on the field of Statistics in January next year.