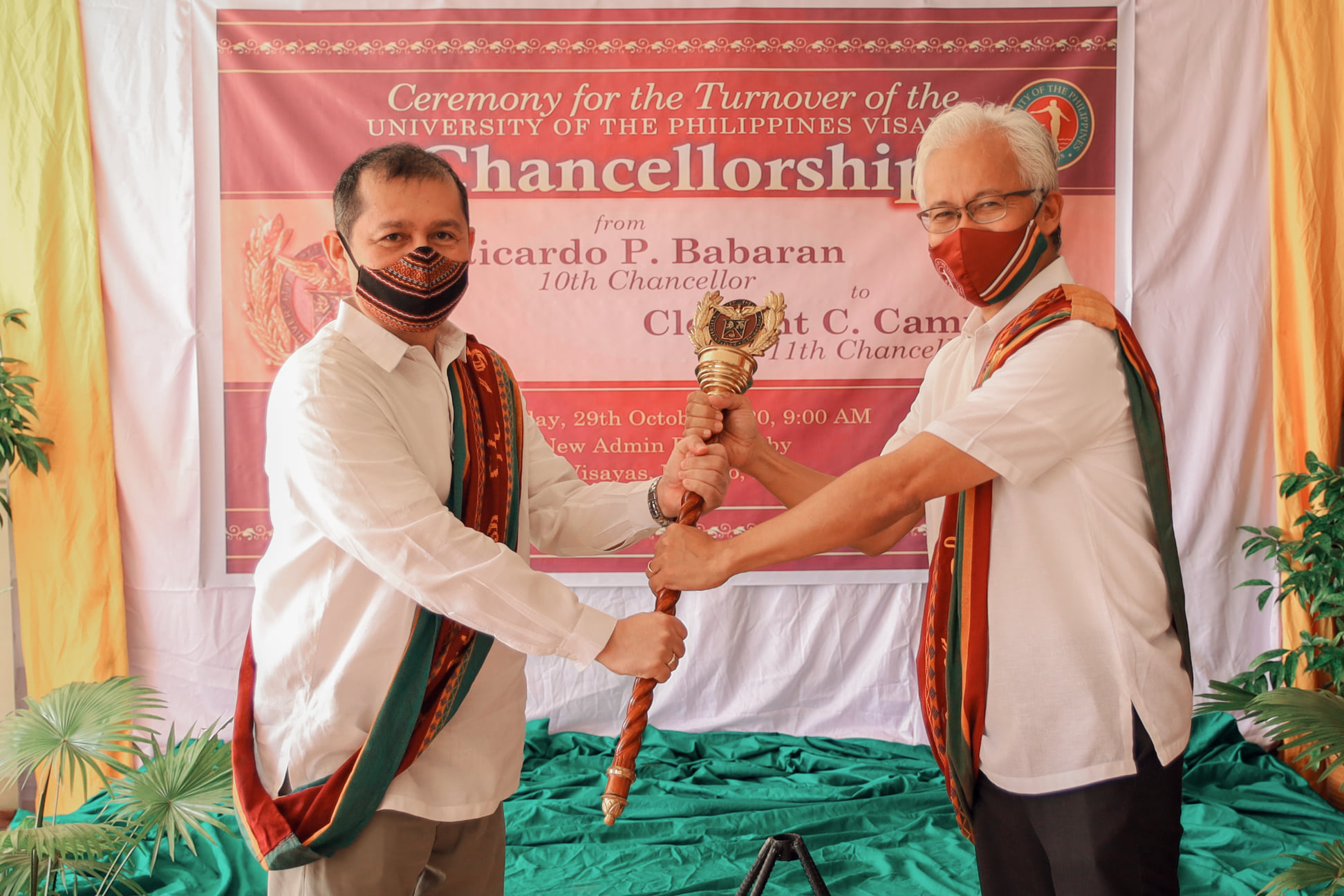 In a simple ceremony held on October 29, 2020, outgoing Chancellor Ricardo P. Babaran turned over the helm of the UP Visayas leadership to incoming Chancellor Clement C. Camposano.

Done at the lobby of the administration building in Miagao, the ceremony was marked by the carrying of the UP Mace by University Registrar Jose A. Go who handed it to Chancellor Babaran. The outgoing Chancellor, before handing it over to Camposano said, “I hereby hand over to you this Mace, symbol of authority of the Chancellorship of the University of the Philippines Visayas, turning over to you by this Act, all the responsibilities and prerogatives of your Office.”

For this part, Camposano, after accepting the mace responded, “I accept this Mace and hereby solemnly pledge that I shall devote all my efforts to advance the thrusts toward the future of the University of the Philippines Visayas.”

The UP Mace symbolizes the authority of the UP President and the Chancellor.

Also introduced during the ceremony were the vice-chancellors of Camposano, namely, Dr. Philip Ian P. Padilla for Academic Affairs; Prof. John Lorenz R. Belanio for Administration; Dr. Harold M. Monteclaro for Research and Extension; and Dr. Rhodella A. Ibabao for Planning and Development.

In a short remark, Babaran thanked the UPV constituents for helping him meet all the challenges that his administration faced and urged the community to support the leadership of Camposano.

The incoming Chancellor, who hails from Leon, Iloilo, expressed a sense of homecoming for being back in UPV. He is, after all, an alumnus of the UP High School in Iloilo and the BA in Political Science-History program (1986) of UPV. Thereafter, he taught political science and history courses in UPV from 1987 to 1997. He was also the Dean of Students of the Office of Students Affairs from 1005-1997.

He said he was looking forward to working with the UPV community and hopes to get their support as well. His term starts on November 1, 2020 to October 31, 2023.