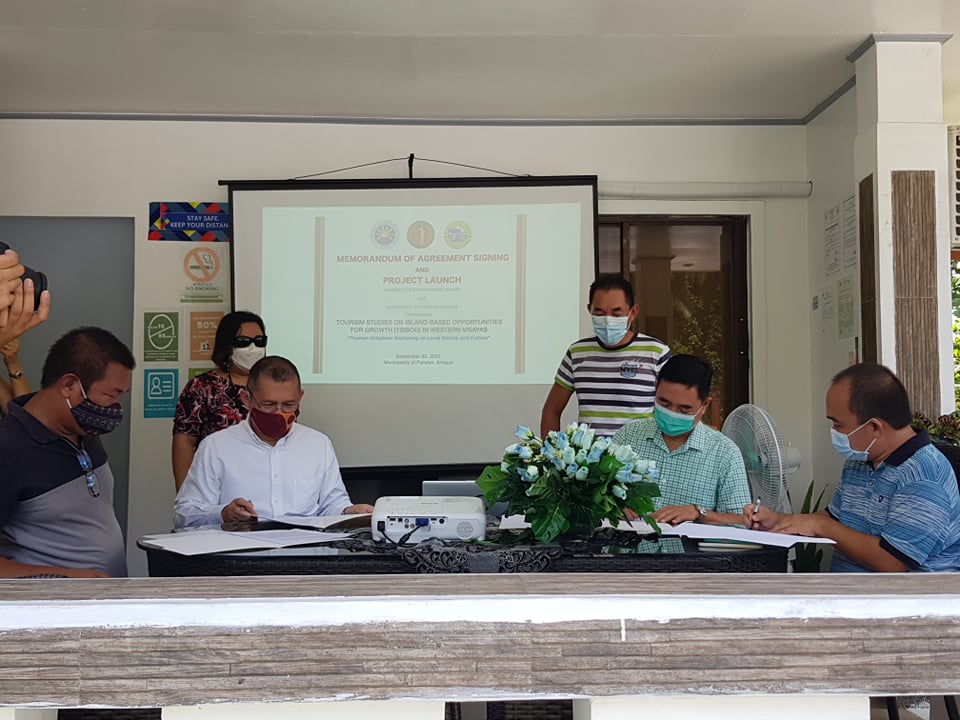 The University of the Philippines Visayas and the Local Government Unit of Pandan signed a Memorandum of Agreement for the implementation of the project “Tourism Initiatives Anchored on Local History and Culture” on September 30, 2021, at Pandan, Antique with UP Visayas Chancellor Clement Camposano and Pandan, Antique Mayor Plaridel Sanchez VI. Signing as witnesses were Sashah Dioso of the UPV Center for West Visayan Studies and Vice Mayor Raymund Nonato Gumboc.

The University of the Philippines Visayas is implementing the Commission on Higher Education (CHED)-funded program titled “Tourism Studies on Island-Based Opportunities for Growth (TSIBOG) in Western Visayas. The program aims to assess the challenges and opportunities of tourism in the “new normal.” It seeks to help build the tourist capacities of the local government units (LGUs), tourism front-liners, businesses, and academic institutions in Western Visayas through its components: human capital, food, and cultural heritage. The program is divided into three (3) clusters with seven (7) sub-projects.

One of the projects under the program is “Tourism Initiatives Anchored on Local History and Culture” by the Center for West Visayan Studies, which aims to: tap the role of various stakeholders in cultural education and heritage promotion; promote understanding and appreciation of tangible and intangible cultural heritage in Pandan, Antique; and review existing tourism activities and identify possible cultural heritage that would form part of a tourism circuit that will be crafted and implemented. The project recognizes that Pandan can explore culture-based tourism as its additional offering aside from the popular ecological tourism destinations for which it is known.