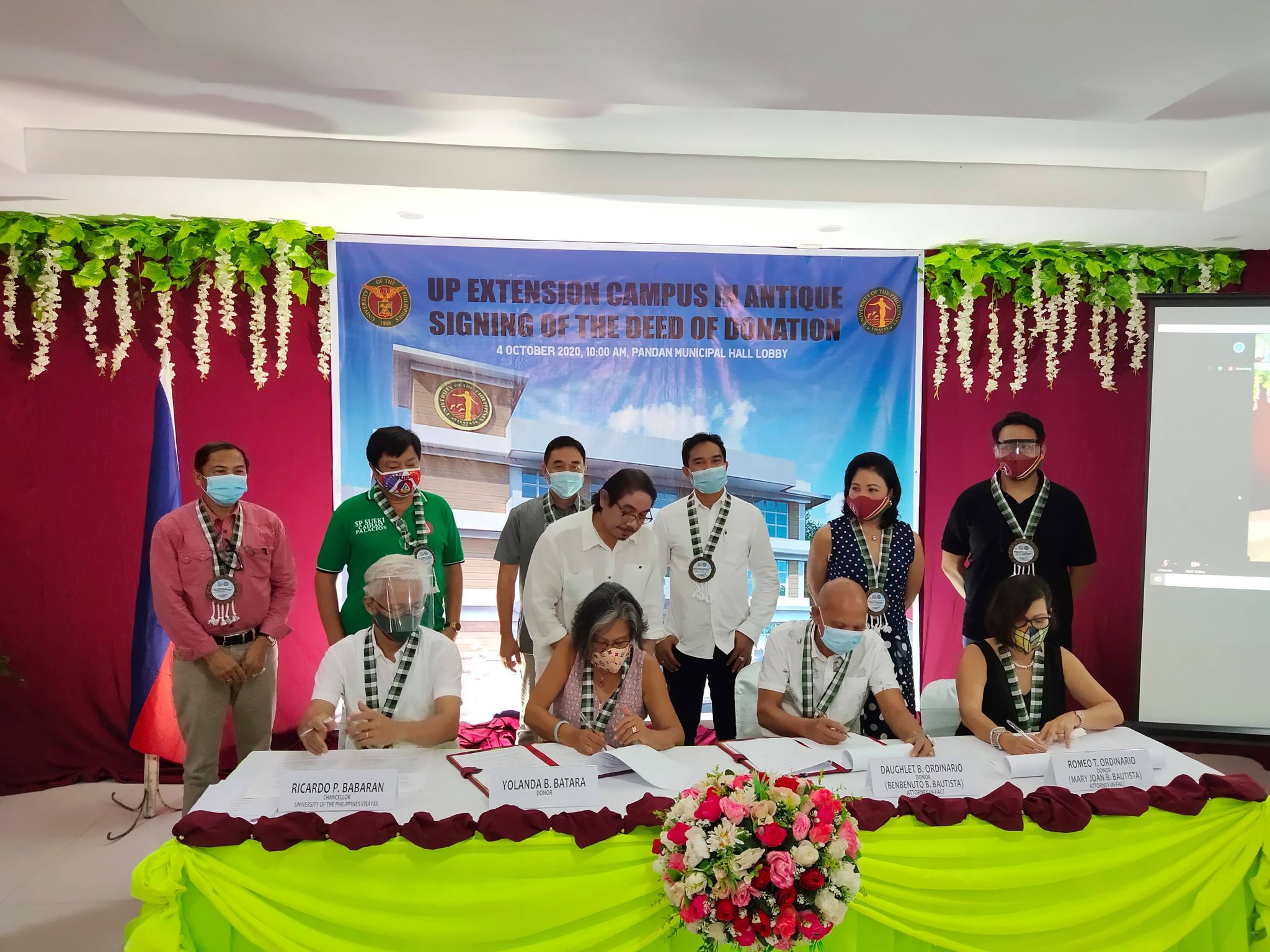 UP marks Antique presence through extension campus in Pandan

UP has finally marked its physical presence in the Province of Antique after the signing of the Deed of Donation for the lot and the ceremonial groundbreaking at the Pandan Municipal Hall and at Brgy. Nauring respectively on October 4, 2020. The project which aims to democratize admission to the national university and bring UP closer to the communities in northern Panay is the brainchild of Deputy Speaker and Antique Representative Loren Legarda who provided the allocation when she was still a senator.

The unit to be named the UP Extension Campus Antique and administered by UP Visayas is also envisioned to foster academic collaborations among higher education institutions (HEIs) and state colleges and universities (SUCs) in Antique and northern areas of Panay. The basic facilities of the building will catalyze engagement among CUs in the UP System, research institutions, and local government partners.

Construction of the building which will start in November with a budget of Php 50M (GAA 2019). It will stand on the 500-square meter lot owned by Yolanda Bautista Batara, Daughlet Bautista Ordinario and her husband Mr. Romeo Ordinario which they donated to UP. The donation was facilitated by the UPV Office of the Vice Chancellor for Planning and Development under Vice-Chancellor Martin Genodepa with assistance from Pandan Mayor Plaridel Sanchez VI and Vice Mayor Raymund Gumboc.

At the signing of the Deed of Donation, Mrs. Yolanda Batara revealed her family never owned a piece of land before but because of education, she was able to work and earn enough to acquire some real property including the lot in Brgy Nauring. She said her family knew that value of education and hence did not hesitate to offer a piece for their property to help in the education of people in her hometown.

Mr. and Mrs. Ordinario, who were unable to go home for the occasion were represented by their legal representatives, Ms. Mary Joan B. Bautista and Mr. Benbenito B. Bautista. The Ordinario couple witnessed the event via Zoom.

The other signatories to the Deed of Donation are UP President Danilo Concepcion and Vice President for Development Elvira Zamora and UP Visayas Chancellor, Dr. Ricardo P. Babaran.

Deputy Speaker Loren B. Legarda delivered, via phone patch, her message during the program. She emphasized her desire for the training programs in the UP Extension Campus to primarily assist in the flourishing of the biodiversity of the Northwestern Panay Peninsula as well as to support the capabilities of the fisherfolks, weavers, and small producers in the area.

President Danilo Concepcion sent a video message and welcomed the new campus that can influence in the growth of this area of the country.

Initial activities lined up as part of establishing UP’s presence in Antique are continuing education programs related to fisheries and entrepreneurship. UPV researchers and scientists have also lined up projects and programs in the province particularly in the areas of business management for fisherfolks, transfer of post-harvest technologies, sugar production, fisheries education, and food safety awareness. (AL Ramirez, IPO)