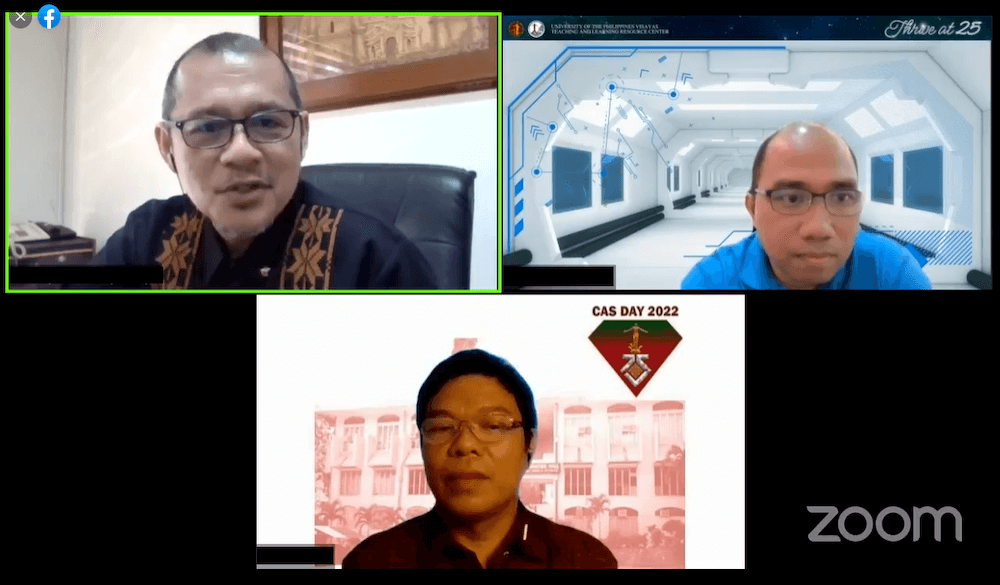 With the theme, “Thrive at 25,” the UPV Teaching and Learning Resource Center celebrated its “Silver” or 25th Anniversary with a week-long series of activities and games.

The center, founded in the year 1997, was part of the development program of UP that established learning resource centers in different UP constituent colleges under the administration of then UP President Dr. Emil Q. Javier.

The week-long celebration started with the opening program honored by UPV’s Chancellor, Dr. Clement C. Camposano and Assistant to the Vice Chancellor for the Learning Management System and Associate Dean of the College of Arts and Science, Prof. Nilo C. Araneta. During the program, the TLRC took the opportunity to launch its newly designed website and office ID video that enumerates the different programs, services, and facilities of the unit.

In his keynote address, Chancellor Camposano noted the theme, “Thrive at 25,” emphasizing that the TLRC is did not only survive, but it also thrived. “It is important to point out especially given the context, which is pandemic. Because the pandemic has really upended our world, especially the academic world,” the Chancellor said, furthering that the unit is “at the cutting edge” of the university as a learning organization.

Acknowledging the role of the TLRC in the academe, Chancellor Camposano said that the TLRC has always been a “solution provider” and also noted that given the constantly shifting ground, TLRC has to expand its role and also become a unit that “defines the problem.”

The Chancellor did not also leave out the current remote learning landscape, emphasizing the need to see technology as a transformative tool.

In connection with this, the TLRC also took the opportunity to conduct a knowledge and skills enhancement program during its celebration week by holding an introductory webinar on the Statistical Program for Social Sciences (SPSS) on its second day of the festivities.

The webinar delved into the basics of the software, guided by the resource person, Prof. Daniel David Pamplona, Assistant Professor from the Division of Physical Sciences and Mathematics of the College of Arts and Sciences.

The integration of a research-based activity amidst its celebration surely upheld the TLRC’s role as an academic support unit of the university.

Of course, the TLRC did not leave out the fun in the celebration. Accompanying the webinar on SPSS, the unit also conducted several contests and games both in an asynchronous and synchronous format.

An essay competition called TeLeEssay called for submissions from students narrating their experiences and circumstances during remote learning. Participating from different colleges and divisions, the students tackled their lives while studying in a remote learning format. At the end of the competition, Rhyan Joshua Lumagalan, a first year BA in CMS student, emerged as the champion, besting several other competitors.

Lumagalan’s essay delved into learning inequalities during the online learning environment, sticking to the theme of the TeLeEssay, “Being a Student During Remote Learning.” Lumagalan’s essay is set to be published in the official publication of the TLRC along with the other participants’ essays.

Other asynchronous activities were also held by the unit, like the TeLeTrivia, a crossword hunt puzzle participated by over 50 students across the different colleges of the university and Telempics, a mobile game competition, were made to submit their highest scores in the two games selected by the TLRC.

The TLRC also reran its acclaimed TeLeBingo!, participated by not only students but also faculty members and UPV staff. The event is a synchronous bingo game that utilizes the mechanics of the classic bingo game with a twist, that being it is held fully online, and participants are to create patterns based on the TLRC anniversary theme.

This year’s winners of TeLeBingo! are a diverse set, each awarded with a cash prize of Php 1000 pesos. The winners were Giann Angelo Tuazon (BA in CMS), Mary Ann Serrano (Aqua Tech from the CFOS Institute of Fish Processing Technology), Leonor Rosal and Sophia Diasanta of the University Library, Gretel May Camiring (BS in Chemical Engineering), Johanna Serrano from the UP High School in Iloilo and Angeline Nuevaespana of the Office of the University Registrar.

“There is a sense of fulfillment in each one of us - that we were able to make learning much easier and better and that our tutees were able to perform well,” guest speaker Engr. Elizalde Miguel Flores, a former peer tutor and a graduate of BS in Chemical Engineering, said as he shared an anecdote on how he came to be a peer tutor of the TLRC. Following his stint as a peer tutor, Engr. Flores graduated magna cum laude and valedictorian of his batch and later on took the 5th highest rank in the October 2020 BS in Chemical Engineering Licensure Examination.

“We are jubilant at the success of the celebration,” Prof. Lindley Kent Faina, director of the TLRC, said as he addressed the participants of the different activities during the awarding ceremony and closing program.

As the TLRC bade farewell to the UPV constituents who played a huge role in the success of its celebration, it also stood by its mandate to serve the university through programs that enriched the teaching and learning experience of students and teachers and hoped to continue to thrive beyond 25.