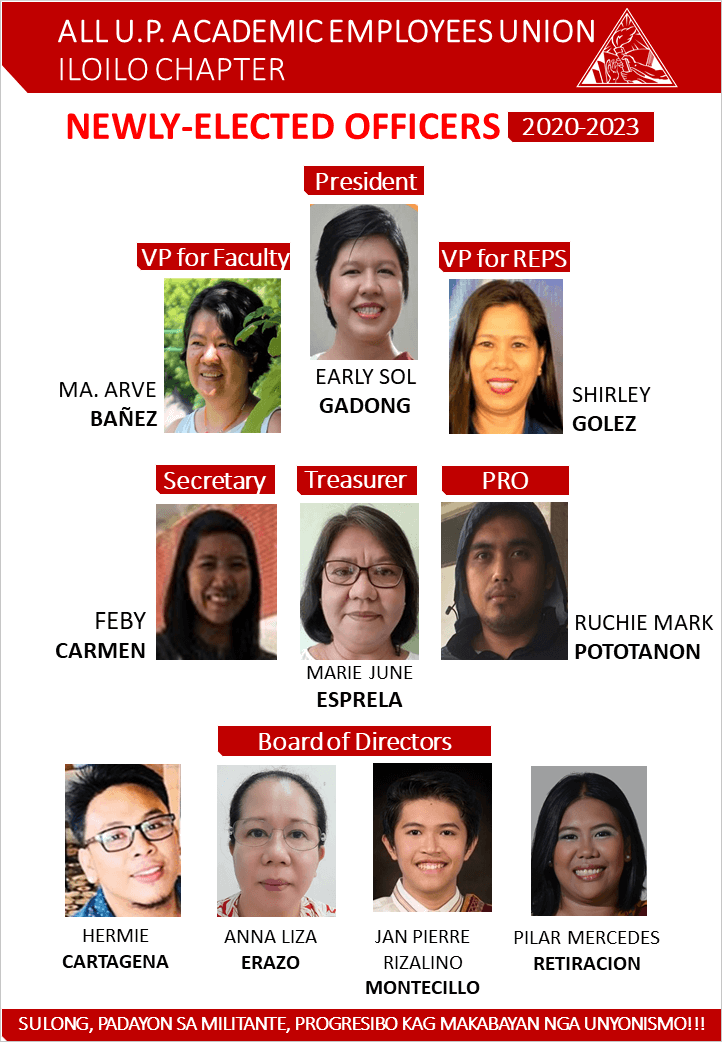 The All UP Academic Employees Union-Iloilo Chapter had its General Assembly (GA) last November 17, 2020. The activity was conducted via Zoom and began at 1:00 PM.

The GA program was participated in by Acad Union members comprised of faculty members and Research, Extension and Professional Staff (REPS) of the UP Visayas Iloilo and Miagao campuses. Sectoral regents Ramon Guillermo (Faculty) and Mylah Pedrano (Staff) also graced the occasion and gave their messages. The Acad Union- National Secretary General Pauline Hernando presented the National Situationer. Reports from the Iloilo Chapter Treasurer and President, and updates on the ongoing CNA negotiations were also delivered.

The second part of the GA was the election of a new set of officers. The whole conduct of the program was marred with difficulties by the unreliable internet connection in both Iloilo and Miagao campuses. It was decided that the voting will be done via balloting through Google Docs. The voting was closed at 5pm with a new set of officers declared. Pauline Hernando and Noe Santillan (Director-at-Large, Acad Union National) served as the election committee.

The new set of officers will be serving for a term of three (3) years from 2020 to 2023. An oath-taking ceremony was conducted the next day, November 18, 2020 via Zoom and was presided by Pauline Hernando and Noe Santillan. During the ceremony, the officers are reminded of the principles of Militante, Progresibo at Makabayang Unyonismo (MPMU) as the Acad Union faces the challenges of the ongoing pandemic (with remote learning and work from home as consequences), disasters, and national issues of democracy (especially the pervasive redtagging) and sovereignty.