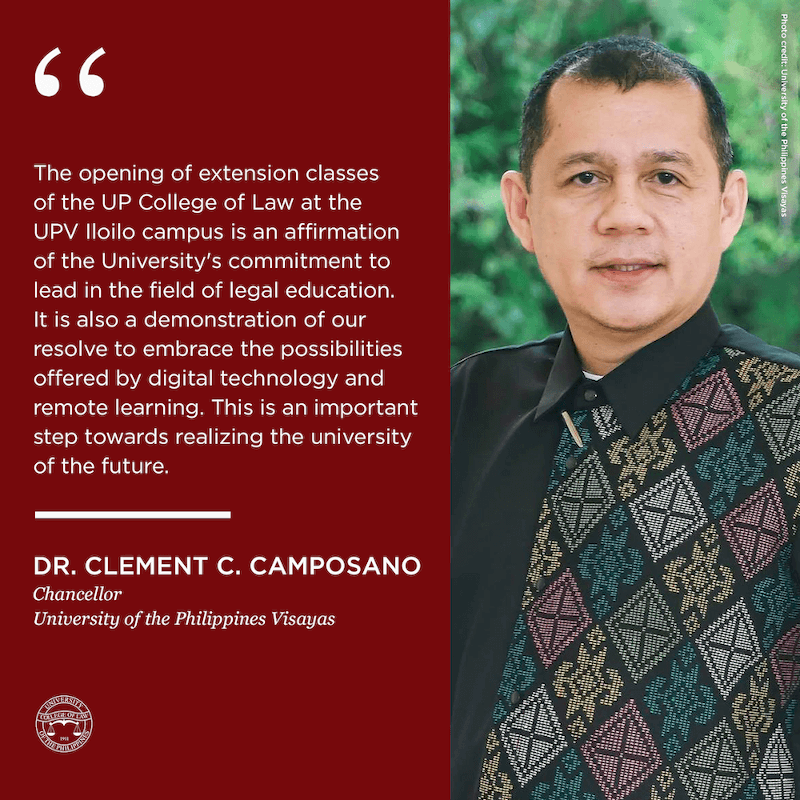 The UP College of Law offers the Juris Doctor program in its home campus in UP Diliman. In 2016, the College began offering the JD program in the UP Bonifacio Global City campus. This year, the College will welcome the pioneer batch of JD students for UP Iloilo.

According to UPV Chancellor Clement C. Camposano: “The opening of extension classes of the UP College of Law at the UPV Iloilo campus is an affirmation of the University's commitment to lead in the field of legal education. It is also a demonstration of our resolve to embrace the possibilities offered by digital technology and remote learning. This is an important step towards realizing the university of the future.”

According to UPV Vice Chancellor for Academic Affairs Philip Ian P. Padilla: “I would like to welcome the pioneer batch of UP Law in UPV this First Semester A.Y. 2021-2022. We wish you the best of everything in your law studies with UPV as host. This will hopefully lead to the strengthening of UPV's mandate, as a SUC and the national university for quality higher education in the region in the field of law, with a fisheries flavor and marine affairs as context.  Mabuhay kag padayon!”

The pioneer batch of faculty members for the UP College of Law extension classes in UP Iloilo is led by retired Supreme Court Justice Francis Jardeleza who will teach constitutional law. Justice Jardeleza is an alumnus of UP Iloilo where he graduated high school as valedictorian and where he was awarded Most Outstanding Student upon earning his degree in BA Political Science.

The criminal law class will be handled by Assistant Professor Theodore Te, director of the UP College of Law clinic legal education program and an expert in criminal law and procedural law. The other faculty members are Assistant Professor Andre Palacios, an alumnus of UP Iloilo, who will teach Legal History; Attorney Fina Bernadette De la Cuesta-Tantuico for Legal Bibliography; and Attorney Jose Maria Marella for Legal Method.