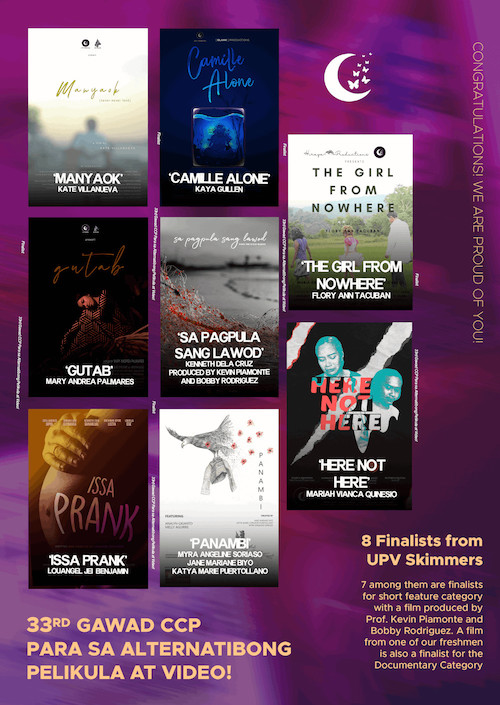 Eight films from HumDiv compete in the 33rd Gawad Alternatibo

Eight films produced by students and professors from the Communication and Media Studies (CMS) program of the Division of Humanities have been selected as finalists for the 33rd Gawad CCP Para sa Alternatibong Pelikula at Video.

Established in 1987, Gawad Alternatibo is the longest-running independent film competition of its kind in the ASEAN Region. It recognizes Filipino films in four categories -- Short Feature, Documentary, Animation, and Experimental.

This year, among the eight films from UP Visayas Miagao, six were produced by students of filmmaker and lecturer, Arden Rod Condez. Professors and filmmakers, Kevin Piamonte and Bobby Rodriguez, also produced a film funded by the university.

Seven films are finalists of the Short Feature Category, while the other one is a documentary produced by first year CMS student, Mary Angeline Soriaso, Jane Mariane Biyo from the College of Fisheries and Ocean Sciences, and Katya Marie Corazon Puertollano from the University of the Philippines Los Baños.

“The Girl from Nowhere” by Flory Tacuban

For the second time, the festival is going to be held online. Last year, Kevin Piamonte’s “Bukog” was also among the finalists in the Short Feature Category. Screening dates are to be announced soon