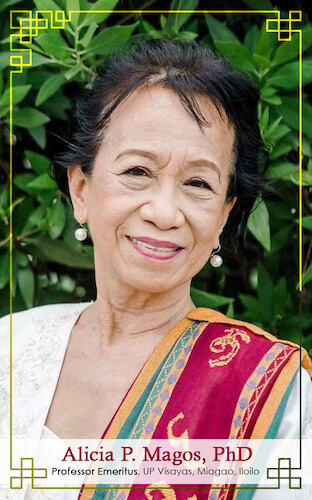 Dr. Magos is a sociocultural anthropologist by profession and has spent almost 40 years of her life as a government employee, most of which as a researcher, professor, and extension worker at the University of the Philippines Visayas in Iloilo. She also served as Director of the Center for West Visayan Studies (CWVS) for seven years and greatly helped in the CWVS mission as a Research Center and as a repository of West Visayan cultural knowledge, making it perhaps one of the richest depositories of Visayan culture in the country.

She continuously served as head of the Kapatagan Committee (formerly Balud Committee) of the NCCA for nine years before it assumed its present name (Central Visayan Committee) with Dr. Felipe de Leon, Jr. as one of the Sub Commissioners, who later became Chairman.

She was a volunteer of NCCA at the time when Schools for Living Tradition (SLT) became a flagship project of the agency. She spearheaded the idea of making Brgy. Garangan, located at the border of Tapaz, Capiz, and of Calinog, Iloilo, as the site of the first School of Living Tradition in the Visayas, thus revitalizing epic chanting and their long-forgotten or abandoned needlework called panubok (from “tubok” to slip a needle inside a cloth). It has now become an additional source of livelihood for some families in the hinterlands of Panay.

In pioneering the establishment of the first SLT in the Visayas and her advocacy for indigenous culture, she was supported by the National Commission for Culture and the Arts (NCCA). Initially started by the NCCA, the UP Visayas and UP-CIDS (UP Center for Integrative Development Studies) gave full support by funding the translation of the ten epics of Panay into four languages, from the original archaic Kinaray-a (Sinauna or Dinuma-an) to contemporary Kinaray-a, Hiligaynon (Ilonggo), Filipino (Tagalog) and English. Later, with the able support of former UP Staff Regent Hon. Anna Razel Limoso-Ramirez (field and research associate) embarked on the difficult and tedious task of reproducing the Panay Suguidanon translated into Contemporary Kinaray-a, Filipino, and English for publication.

Tikum Kadlum won the National Book Award for Poetry for 2015 from the National Development Board and the Manila Critique’s Circle. The main chanter of the epics collected by Dr. Magos, Federico Caballero (Tuohan or “Credible One”), won as GAMABA Awardee (2000) upon the nomination of Dr. Magos and her team from UP Visayas. This time around, Dr. Magos, with support from the UPV Indigenous Peoples Center, is working on the grant of two Ati twins from Panay to be recognized as the Gawad Manlilikha ng Bayan Awardees for 2022.

Dr. Magos researches mostly topics on the indigenous culture of Panay, for which she won the Best Research Study for SEAMEO (Southeast Asian Ministries Education Organization) in 1996 among 15 participating countries of Southeast Asia. This was followed by a grant as a Fellow in selected universities in Southeast Asian countries and Canada. Dr. Magos has had numerous publications in reputable journals, books, monographs, and modules here and abroad.

She was also one of the 10 Team Leaders who won the First Prize in UNESCO’s Best Research Study, published with the title “Learning from Life” (1994), and was awarded by UNESCO-Paris.  Together with her Research Assistants Judith Pabito and Anna Razel Limoso – they produced the book report on Literacy and Numeracy on sites in Iloilo and Negors provinces.

Dr. Magos served as a cultural consultant to her home province, Antique, and also as a consultant–researcher (2014-2015) to NCIP Region 6 in documenting customary law and indigenous forest practices of the mountain peoples of Panay. At present, she serves as a consultant to the UPV-DENR Project Panay-Guimaras Project Traditional Knowledge Systems for Cultural Resiliency and Sustainable Development. She had been sought after as a resource person to various agencies and government as well as private institutions on topics such as indigenous or traditional culture and oral literature. She is a respected consultant in various UP Visayas projects in areas of Panay Culture and Indigenous Knowledge. She has continuing engagements with DepEd for IP Education and the National Commission on Indigenous Peoples (NCIP)Region VI and VII in strengthening the indigeneity of the mountain peoples of Panay (Halawodnon, Pan-ayanon, Akeanon, and the Iraynon of Antique).

She was also bestowed Kampeon ng Wika by the Komisyon ng Wikang Filipino in 2014. She was also given the Gawad Paz Marquez Benitez by the Unyon ng Manunulat sa Pilipinas (UMPIL) for her Anthropological Research, Teaching, and Work on the Panay Bukidnon and her bringing to the world the Epics of Panay.

But among the recognition and awards that she received, Dr. Magos is most ascribed as the person who initiated the recognition of the Panay Bukidnon culture, which had given platform and empowerment for this indigenous people.