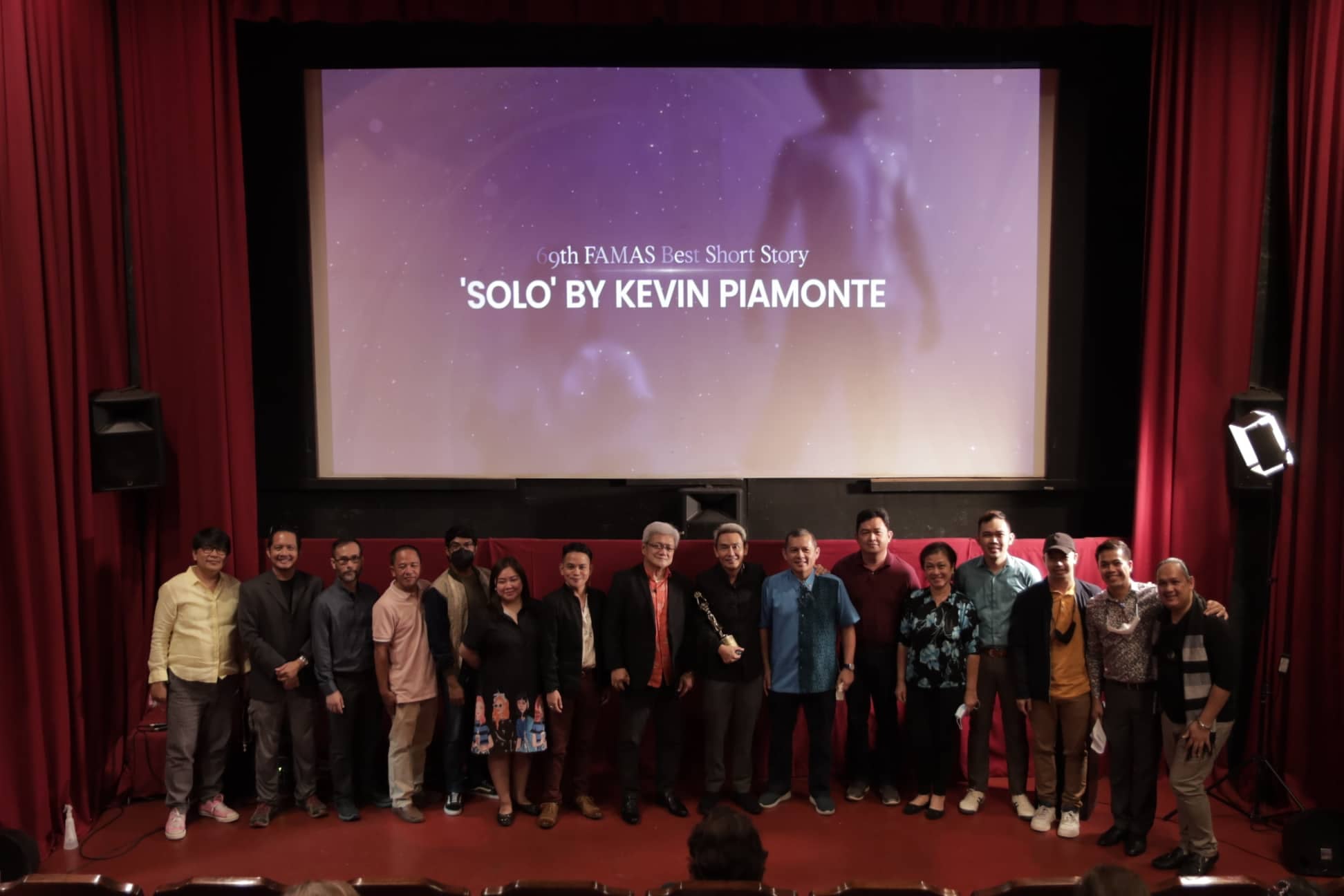 Two years since the pandemic shut down theatres and rendered many cultural productions floating in limbo, the UPV Cinematheque opens its doors for the grand three-day screening and awarding of Kevin Pison Piamonte's FAMAS-winning masterpiece "SOLO".

As the first Ilonggo short film to bag the most prestigious award in Philippine Cinema, the awarding ceremony gathers filmmakers, artists, academics, and the Ilonggo moviegoing crowd to witness a defining moment in Western Visayan Cinema. Representing the Filipino Academy of Movie Arts and Sciences Awards is Mr. Nelson Mendoza who flew all the way from Manila to bestow the award upon Director Kevin Piamonte. The electrifying air of triumph and jubilation inside the theatre shows the unifying power of film in these trying times. The art of cinema is more than just an art of escapism, but a medium for powerful narratives and evocative conversations that remind us of our very humanity.

SOLITUDE OF THE SELF

“Solo” is more than just a movie. It is an exploration and evocation on the depths of love, and the many ways of expressing it without the magic of words. The film’s strength is embedded in its many silences, art house choreography, and a love story that enchants and crushes its viewer’s hearts. In the middle of the narrative is Ron and Jim (played by Peter Deocos and Marveen Ely Lozano) mentor and protégé turned lovers torn by the invisible storms of this raging pandemic. But unlike contemporary queer movies that bank on their queerness to propel the story, “Solo” undresses the queer aspect and focuses on the more primeval, more sensual of human connections: a love story beyond gender, beyond the constraints of the physical, and even the mortal realm.

The film touches on social and political commentary, while still remaining faithful to its core narrative. The struggles of Ron as an artist living in the middle of the pandemic is juxtaposed to visual dramatizations of his internal battle with anxiety. Through avant-garde cinematic techniques and musical scoring, the film highlights an important health issue in the time of the COVID-19 global health crisis. While the government’s response is more focused on the physical aspect of health, one important thing that should not be disregarded is mental health. Ron’s last moments reveal the many silences and fears that haunt people in isolation. Through flashbacks, poetic interludes, and visuals that are meant to raise awareness towards pandemic anxiety, the film melancholically follows the emotional grief and physical suffering of Ron as he fades away without even saying a proper goodbye to his beloved Jim. The tragedy of the film mirrors the unsung lamentations of thousands of people across the country: that their loved ones, and the beautiful memories and moments of life connected to them are tragically reduced into mere numbers: In the case of Ron, COVID Patient M1163.

The film reaches its emotional crescendo with the dance of two former lovers as life and death, past and present, and Ron and Jim merge into a heartbreaking farewell ritual. The beauty of the film lies in its wordless moments as physical and emotional tensions between the characters overlap with its choreography and scoring. The farewell dance between Ron and Jim culminates in a tearful performance that allows the viewers to ponder on the frightening realities of death. Kevin Pison Piamonte’s “Solo” is a heartbreaking elegy that honors the many loves we have lost to COVID 19. Its soul is in its unforgettable love story. Its tragedy moves past its unsaid goodbyes and leads us to the realization that in the end, we will lose all human and worldly connections and what remains is the solitude of the self.

“This is for all Ilonggos!” Piamonte exclaims as he concludes his acceptance speech. His words reverberate around the dark corners of the cinema, turning into a glimmer of hope for every Ilonggo and for every aspiring Ilonggo filmmaker. The victory of “Solo” is not one man’s victory, but the victory of an entire region. This pivotal moment opens new doors to Ilonggo filmmakers and artists alike, and crystallizes a powerful message of decentralizing Manila as the art and cultural capital of the nation. “Solo’s” win stirs the spirits of Ilonggo filmmakers to hone their craft, celebrate their land, and aim for the brightest star.

*Parts of this article were published by The Daily Guardian in a film review entitled “Solitude of the Self: A review of Kevin Pison Piamonte’s Solo” written by John Ray Hontanar last October 11, 2021